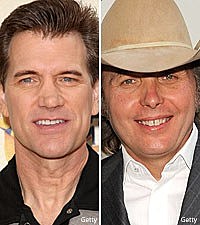 Chris Isaak 's new album title, 'Mr. Lucky,' is apropos, considering he's been able to make music his own way now for over 20 years. Drawing from influences from the '40s and '50s, he developed his unique sound and came up through the ranks at the same time as acts like The Blasters, Los Lobos and Dwight Yoakam, the latter of whom he feels is one of the true greats.

"Dwight Yoakam is about as good a songwriter that ever put a pen to paper. I think he is someone who years from now will still be remembered, like a Hank Williams or Buck Owens," Chris tells the Houston Chronicle.

Michelle Branch feels Dwight is equally amazing in the vocal department. She recently tapped him for a tune on her upcoming album, telling The Boot, "He sings a duet with me, which is just amazing. It was just incredible to work with him."