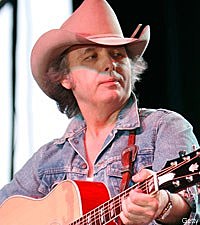 July 27 is a day Dwight Yoakam is not likely to forget. Performing at the famed Greek Theater in Los Angeles, Yoakam received two very special surprises. Just before he took the stage, Councilman Dennis Zine declared the day Dwight Yoakam Day throughout the entire city, in honor of Yoakam's career achievements. Then, just a few moments later, actors Vince Vaughn and Jon Favreau, who star with Yoakam in in the upcoming movie 'Four Christmases,' jumped up on stage to present Yoakam with a gold album in honor of his 2004 compilation 'The Very Best of Dwight Yoakam' reaching sales of 500,000 copies.

In addition to 'Four Christmases', which also stars Reese Witherspoon, Mary Steenburgen, Robert Duvall, Sissy Spacek and fellow country superstar Tim McGraw, Yoakam will also appear in the upcoming flick, 'Crank 2: High Voltage.' No stranger to acting, Yoakam has appeared in several other films, including 'Slingblade' and 'The Wedding Crashers.'

With all his success as an actor, however, Yoakam has no plans to leave his music career behind. Working on his latest album, 'Dwight Sings Buck,' last October, was a tribute to his longtime friend and country legend, the late Buck Owens.

"I'm thinking all the time, and I'm writing at different moments in my head, and I jot things down and work on something," Yoakam tells GAC. "But it's not a formal focus on something. I want the 'Buck' album to live with myself and, hopefully, his fans and my fans throughout the rest of this year. I wanna stand still and let that live for a bit."

Yoakam can next be seen in the upcoming TV special 'CMA Music Festival: Country's Night to Rock,' airing September 8 on ABC. Hosted by Taylor Swift, Julianne Hough and Kellie Pickler, the show will also feature performances by Martina McBride, Alan Jackson, Sugarland and many more.