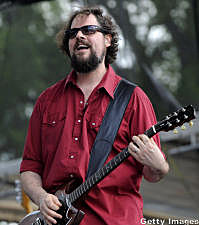 Drive-By Truckers are putting on their 'Go Go Boots.'

That's the title of the country-rockers' new album that is on track to be completed right after Labor Day. The band's label, ATO Records, will ultimately decide the release date, but Chief Trucker Patterson Hood predicts it'll be out late this year or early next.

"I was working on it this week. I cut a new song this week for it and we're just kind of rounding it out and finishing it up," Patterson tells The Boot. "I couldn't be happier with it."

The songs for 'Go Go Boots' were written at the same time as those that made it onto the band's March release, 'The Big To-Do.' When the band considered the 30 songs written for 'The Big To-Do,' they divided them between that album and what will eventually become 'Go Go Boots,' which returns to the sound heard on the band's 2008 release, 'Brighter Than Creation's Dark.'

"That is one that I'm extra proud of," says Patterson of the 2008 album, which contained more introspective songs than the Drive-By Truckers' generally deliver. "I really like that record and feel really strongly about it, but translating that into a rock show, particularly when our fans are expecting a certain energy level [from us] ... was one of the hardest things we have ever done."

After 'Brighter Than Creation's Dark,' the Truckers decided that their next album -- 'The Big To-Do' -- would be full on rock.

"We all said early on that our next record would come roaring out of the box and out of the speakers and we needed to make a reach-out-and-grab-you-by-the-scruff-of-the-neck kind of record. Even the name of it conjures up a show," says Patterson. "That was the whole basis of the dividing line [between] the songs for 'The Big To-Do' and it's shows and these other songs. I feel just as strongly about [the songs that will be on 'Go Go Boots']. It's just the other side of what we do."

After 'Go Go Boots' is released, Patterson says the band will play songs from both albums in their concerts. The combination will create "big fun rock shows even though some of the songs are darker and don't necessarily have happy endings... The goal for next year when ['Go Go Boots'] comes out is to play combined shows with songs off of both of those albums and it kind of becomes its own thing. That's the longer term goal of what we're doing."