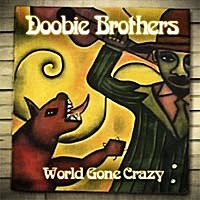 The Doobie Brothers are still grooving after four decades together, and they've recruited another music legend, Willie Nelson, to help out on 'World Gone Crazy,' the group's first new album in over a decade. Willie co-wrote a duet, 'I Know We Won,' with Doobie members Tom Johnston and Patrick Simmons.

"I'd been talking to Willie for ages," says Patrick of the collaboration. "He's a fantastic person and perfectly captured the sentiment."

The new disc, due out September 28, also includes a track featuring former Doobie Brother Michael McDonald, who helped out with backing vocals on 'Don't Say Goodbye.' The band members from the original Doobies all appear on the new CD, and even tapped their original producer, Ted Templeman, to help them capture some of that original magic for the project, as well.

The Doobie Brothers, who were inducted into the Vocal Group Hall of Fame in 2004, are best known for hits like 'Black Water,' 'China Grove,' and 'Takin' It To The Streets,' and have been making music together in one incarnation or another since the 70s. Michael McDonald joined the group in the mid-70s and his smooth, soulful voice became synonymous with the band's signature sound. He departed the group in 1981 for a solo career, and after a brief dissolution, the rest of the band reunited and continued to record and tour for the next three subsequent decades with various members. They have sold 30 million records throughout the course of their career, and spent much of 2010 recording their new album and touring with the band Chicago.

One of the most beloved vocal groups in rock history, the Doobie Brothers shot to fame in the '70s with now-classic hits like 'Listen to the Music,' 'China Grove' and 'Long Train Runnin'.' Michael McDonald took over lead vocals in 1976, when original frontman Tom Johnston fell ill. To date, the group has sold more than 30 million albums.

The Doobies' new duet partner, Willie, has been busy with collaborations in 2010. The Redheaded Stranger also teamed with pop artist Jason Mraz earlier this year and contributed a track to Amos Lee's new CD, while also lending a hand in the political field. He recently played a fundraising concert in Hawaii for former Democratic U.S. Representative Neil Abercrombie in his bid for the governor's race against former Honolulu mayor Mufi Hannemann. Willie is also gearing up for his annual Farm Aid concert on October 2 in Milwaukee, with both Amos and Jason slated to perform, along with Farm Aid board members and longtime supporters Neil Young, John Mellencamp and Dave Matthews.