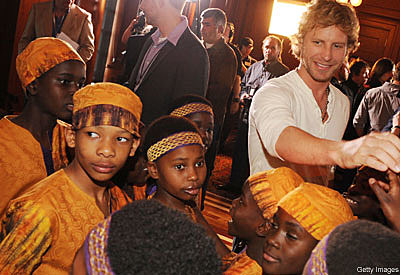 Dierks Bentley took the opportunity to go in the studio with the African Children's Choir this week while the kids were in Nashville to perform at the Nashville4Africa benefit concert.

"I think it was the first time they'd ever been in a studio like Ocean Way," Dierks told The Boot. "We did a song that I've been holding onto for awhile, waiting for the right time to record it. I'm not really working on my next album yet but I'm thinking about it, and I had to get these kids in the studio while they were here."

Dierks' face list up as he praised the children, who recorded harmonies and background vocals with him on the song (the title of which he's keeping secret for now).

Dierks says he is usually out of town when asked to perform at benefits, so he was thrilled to be able to do Nashville4Africa, which was organized by Big & Rich's 'Big' Kenny Alphin. "I feel that anything we can for kids is great. This project isn't just helping build a school; it's helping these kids who are trying to survive. It's a beacon of hope going across their country."

The singer told The Boot that he went to Africa for eleven days in 2006. The trip was an eye-opening experience.

"It is beyond poverty in some of those villages," he says. "It's beyond anything you can possibly imagine. So when you hear about a cause like this, where you can go and sing and help out these kids, it's great. Big Kenny has a big heart and I'm grateful for these guys who are here to do good deeds."

The choir, made up of kids ages seven to eleven, performed with Dierks on Wednesday's show. They sang 'Beautiful World,' the tune he did at the Nobel Peace Prize concert in Norway last December. "I think this song reflects the spirit here in this room tonight," the singer said by way of introduction.

Dierks left immediately after the Nashville4Africa show for a concert in Iowa. He has three dates in Minnesota before heading for Australia to tour with Brooks & Dunn.