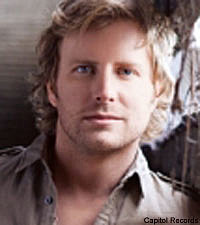 Dierks Bentley recently had the pleasure of meeting the man responsible for a career highlight -- President Barack Obama quoting him. At a special White House concert last month, the president said to the audience, "Dierks Bentley called country 'the best shrink that fifteen bucks can buy.'"

Those words were written by Nick Shapiro, who came to see Dierks perform live in Bristol, Va., a few weeks later and was hanging out in the singer's dressing room after the show. "We were playing bluegrass until like three in the morning, and while we were all talking I found out he worked at the White House," Dierks explains. "I said to him, 'I can't believe Obama quoted me, that's just so crazy.'"

Nick immediately told Dierks, "Well I'm the assistant speech writer for the president, and I put that quote in there ... I fell in love with your music in Austin, Texas, and I had to figure out a way to put that quote in his speech."

Dierks was thrilled to meet Nick, a huge music fan who at one time also played in a band. "We hung out all night and we ended up driving him and his girlfriend back to her house in the bus, which was a mistake because we hit a deer on the way and totally freaked the poor girl out!"