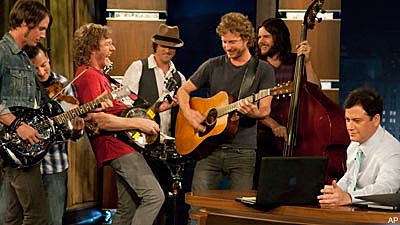 Dierks Bentley is no stranger to improvising on stage. So when the lights went out in the 'Jimmy Kimmel Live' studio just one hour before the country star was set to perform on the late night talk show, he didn't flinch.

The Associated Press reports that an unexplained power outage shut down Kimmel's control room, broadcast transmission center and tape operations area. Audience members were already in their seats, with the night's guests -- actor Seth Rogen, comedian John Henson, Dierks and his band -- all waiting, according to Dierks, in a "very spooky backstage."

But thanks to the quick thinking of Kimmel himself, the show went on as planned ... just with a bit more narrow of a camera angle. The host grabbed his laptop computer and taped the entire show on his webcam. "Who knew you could shoot a late night show with a Mac?" Dierks joked via Twitter.

'Up on the Ridge' (Boot Exclusive: Making of the Video)