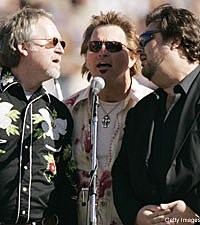 Country group Diamond Rio hasn't had a hit song in a few years, but they're taking some hits for a song they recorded in 2005. And the trouble started at, of all places, a Florida elementary school.

Nashville Gab reports that the parents of two third-graders at the Webster School in St. Augustine have sued the St. Johns County School Board, saying their children were taught the group's song 'In God We Still Trust' for an end-of-the-year after-school assembly. The lawsuit claims having the students learn the song "amounted to religious indoctrination and interfered with the parents' right to raise their children according to their own beliefs."

While the children were told they weren't required to practice the song, they were also told that doing so meant they wouldn't be allowed to participate in the program, the suit further alleges. The song was pulled from the program just hours before the lawsuit was filed, but a hearing on the dispute has been scheduled for April 8 in Jacksonville, Fla.


Diamond Rio's Marty Roe told the Florida Times-Union that forcing schoolchildren to either learn the song or miss participating in the program is probably a mistake, but added that allowing a minority viewpoint to dictate whether the song is used was wrong as well.

"This song is about the time-honored values on which our forefathers founded this country," Roe said. "These values are reflected in America's monuments, our courtroom procedures, our money and at one time were reflected in our schools. Now we live at a time in American history where a small percentage of citizens want to take God out of all of this."

Although the school board's lawyers argue that music based on sacred texts has been used in public school choral programs for years, the parents' lawyer says 'In God We Still Trust' goes beyond traditional sacred music taught in schools, and attacks the idea of government neutrality in religious matters.

Since recording the song and seeing it become something of an Internet sensation after performing it for servicemen and women in South Korea, the group has used 'In God We Still Trust' as an encore at their concerts.

"We realize that it's a sensitive subject and there are those who don't share the same point of view. That's their right," said Roe. "But a majority of Americans don't want God taken out of public places. It shouldn't be taboo. That's our roots. And digging up the roots destroys the whole tree."