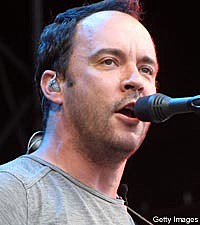 Rocker Dave Matthews is getting ready to crash into the CMA Awards. The musician will perform a duet with good friend Kenny Chesney, offering up the Top 10 hit. 'I'm Alive,' during the star-studded gala.

The song, which Kenny admits is the most personal track on his 'Greatest Hits II' album, is also his own life's mantra. "I'm alive; I get to make music," Kenny told The Boot. "I've got a lot of great friends. That's the message of the song."

The duet will mark Dave's first appearance at the CMA Awards, although he has ventured into country territory before, teaming with Emmylou Harris for an episode of CMT Crossroads. He joins rocker Daughtry on the performance list, as well as some of country's biggest stars, including Tim McGraw, Carrie Underwood, Brad Paisley, Jason Aldean, Lady Antebellum, Sugarland, Darius Rucker, Reba McEntire, Taylor Swift and others.