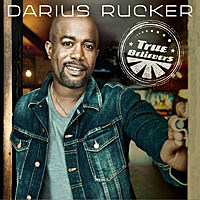 Darius Rucker's third country album, True Believers, finally has a release date: May 21. "I'm very proud of this record," says the singer, who wrote 10 of the project's 12 tracks. "The songs, the co-writes, the vibe – it's all really different from what we've recorded and released on the past two albums, and I hope that difference resonates with the fans." The South Carolina native's first two solo country records were both chart-toppers, producing five No 1 singles.

Dierks Bentley, Keith Urban, Lady Antebellum and rapper Pitbull are the latest acts to join the all-star lineup for "ACM Presents: Tim McGraw's Superstar Summer Night." The special will be taped Monday, April 8 at the MGM Grand Garden Arena in Las Vegas and will air at a later date on CBS. Previously-announced performers include Jason Aldean, Luke Bryan, Taylor Swift and Ne-Yo. The concert will benefit ACM Lifting Lives, the philanthropic arm of the ACM, dedicated to improving lives through the power of music.

Sheryl Crow recently previewed some of her new country music in a private, acoustic performance for a select group of radio listeners, thanks to Jacksonville, Fla., station 99.1 WQIK. In addition to "Easy," the song Sheryl says she wrote as a "stay-cation" answer to Kenny Chesney's many tropical-themed tunes, the singer-songwriter performed "Calling Me When I'm Lonely," and the hits "Strong Enough," "Picture" and "If It Makes You Happy." She also talked about life on the road with two preschool-aged children and revealed details about some of the special guests on the new album, including Brad Paisley, Zac Brown and Ashley Monroe, whose new album earned a rave review from the country-rock superstar. Watch here.

Cassadee Pope is hard at work on her first solo album for the Republic Nashville record label. "The Voice" season three winner says love is the central theme, as she draws songwriting inspiration from her friends' stories about their romances and heartaches. One song, though, is about the 23-year-old singer's estranged father. "It is one of my favorites," she says of the tune, which she co-wrote with frequent Taylor Swift collaborator, Nathan Chapman. "I'm sure it will strike a chord in his heart and make him a little teary eyed." [People]

Dierks Bentley certainly knows the power of music. He's one multi-instrumentalist who also keeps fans -- and his fellow band members -- entertained on and off stage. But could he be taking things just a bit too far? In the singer-songwriter's latest hilarious DBTV clip, he can't seem to stay away from his trusty banjo, much to the chagrin of those around him. Sensing his audience (whether in a crowded van or on an airplane) doesn't share his enthusiasm for the five-stringed instrument, Dierks becomes "one" with nature (strumming his banjo while standing barefoot and shirtless in a river) and even takes to the ice to play hockey, all the while not putting the thing down. The fun concludes with a visit to the American Banjo Museum in Oklahoma City. Watch the latest DBTV webisode here.

Taylor Swift is Red hot, of course, but there's a legendary rocker who thinks she's just plain smokin'. Aerosmith frontman Steven Tyler was asked recently which celebrity he'd like to intern for and his answer was, "She's blonde with all the hits. Taylor Swift. She's hot." The 64-year-old added, "More than that, she's beyond talented. I have to write a song with her." No stranger to blonde, country superstars (or beautiful women in general), Steven has already collaborated with Carrie Underwood on a duet featured on the most recent Aerosmith album. [US Weekly]