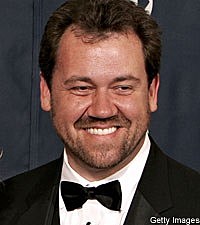 Dan Tyminksi has a problem most artists only dream about. Originally known as the guitarist and vocalist for Alison Krauss + Union Station, he also recently formed his own band, The Dan Tyminksi Band, that's doing very well. Too well, actually. Dan, who's nominated for nine IBMA (International Bluegrass Music Association) awards next week, is having a hard time juggling his own venture with his role in Alison's band.

"That's the thing we're wrestling with right now - how to really make it work so that we don't have to let this band go," he tells the Columbia Daily Tribune (via GAC).. "Everyone has a family, and everyone has a fairly busy life. It's always worked in theory as we've sat down and worked it out on paper and said it can happen. We've never actually had both bands tour at the same time - this next year will be an interesting year. We plan on continuing on, and we're just trying to figure out how to straddle that line."

Dan rose from the bluegrass ranks to become something of a household name after appearing briefly on the big screen in 'O Brother, Where Art Thou?,' starring George Clooney. Winning multiple awards for his song from the movie, 'I Am a Man of Constant Sorrow,' including a Grammy, Dan also was George's singing voice in the film.

To keep track of Dan's busy schedule, check out his official website. The IBMA Awards will be handed out at Nashville's Ryman Auditorium on Thursday, Oct. 1.