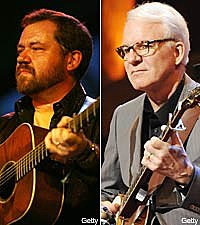 Actor, comedian and banjo picker Steve Martin is among the leading nominees for this year's International Bluegrass Music Awards. The IBMA has recognized him in six categories, including Banjo Player of the Year. The actor/comedian/musician released the bluegrass album 'The Crow' earlier this year.

The nominees for the 20th annual ceremony, to be held Oct. 1 at Nashville's Ryman Auditorium,were announced Thursday at the Country Music Hall of Fame. The Dan Tyminski Band leads the pack with nine nominations, including Entertainer of the Year. Dailey & Vincent, the reigning Entertainer of the Year, scored seven nods including once again being included in the top catgeory.

Other multiple nominees include Michael Cleveland & Flamekeeper, The Grascals, Blue Highway, Del McCoury Band and Rhonda Vincent and the Rage.

This year's International Bluegrass Music Hall of Fame inductees are pioneering string band The Lonesome Pine Fiddlers, and The Dillards, who can still be seen portraying bluegrass band The Darlings on reruns of 'The Andy Griffith Show.'

The awards show will be hosted this year by Kathy Mattea and legendary bluegrass band Hot Rize, who received the IBMA's very first Entertainer of the Year honor in 1990.

An interesting side note: Both Steve Martin and Dan Tyminski have done some voiceover work on the big screen - Steve in 'The Prince of Egypt' and Dan as the singing voice of George Clooney in 'O Brother, Where Art Thou?'