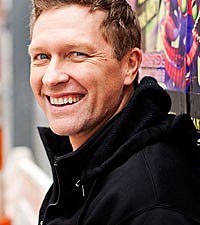 Craig Morgan, whose song "This Ole Boy" continues to climb the Billboard Country Songs chart, has got his eye turned toward Hollywood.

Appearing on Lifetime Channel's drama "Army Wives" a few weeks ago has definitely ignited the acting bug in Craig. This week, he is in Los Angeles meeting with directors and other folks about his budding acting career.

"I've always wanted to do it, we just needed that start," he tells The Boot. "['Army Wives'] gave it to us in a big way ... It opened up a lot of doors. I had Angie Harmon in my video [for 'This Ole Boy'] and she wasn't happy about the fact that I was on another show before I was on hers!"

In fact, Craig now has an invitation to appear on Angie's detective series, "Rizzoli & Isles." "She actually texted me [last week] and asked me if I would be a serial killer on the show and I said I'd do it, but I'd rather be a good guy," says the singer-actor. However, he admits there's definitely an appeal to getting "to pretend and to be somebody you're not ... I told her absolutely I would do it and I'm hoping they'll write me in."

The former cop gets a kick out of how procedural TV shows handle his previous profession. "You watch it and go, 'Oh really? C'mon, c'mon.' Surely nobody will believe that," he says with a laugh. The most egregious, he says, are the "CSI" series of shows. "That is so far out there, it blows my mind. They do a decent job, but they glamorize it. It's so glamorous. I never wore a suit like that."

Craig's reality series, "All Access Outdoors," which runs on the Outdoor Channel, is in its second season, but the singer says he keeps his eye on another reality show, The History Channel's "Swamp People." "I love them and it was so funny because one of stars on the show had been to three or four of my shows and I didn't even know it. He was a huge fan. [I] got to meet him. That's pretty cool. Love that show."