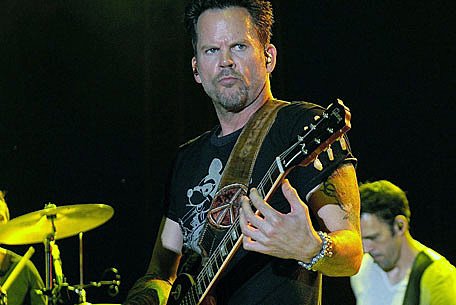 The third annual Country Throwdown Tour Fired Up by Kingsford® landed in Nashville for its final day of the six-week extravaganza on Sunday (July 8). The talent-filled trek was met with a slew of fireworks and a little rain during the stop at The Woods Amphitheater at Fontanel.

The tour, featuring headliner Gary Allan along with Sunny Sweeney, Eric Paslay and Florida Georgia Line, was delayed by one of the first thunderstorms that the Nashville area has had in weeks, following eight days of record highs for the area. The show was stopped for about an hour, but quickly resumed when the clouds moved on.

"I think this is the only time this has happened on this tour," Sunny Sweeney told The Boot. "That's pretty good for a tour that's been out on a month-and-a-half of dates!"

No one seemed to mind the rain, least of all the fans who remained steadfast throughout the afternoon and evening of music. They were treated to several different presentations, including one called the Bluebird Cafe Stage featuring Channing Wilson, Carly Pearce, Rose Falcon and Mama's Blue Dress.

The Bluebird Cafe Stage is one of the things that attracted the headliner to this particular tour. "The reason I liked this tour was how eclectic it was, like bringing the Bluebird-in-the-round on tour," the singer told The Boot. "It is pretty common to have in-the-rounds in Nashville, but in other cities it was something new and different, and they loved it."

Jonathan Singleton, who was on the first Throwdown Tour, came out to participate in the Nashville stop. "I was going to be here anyway so they said, 'Why don't you just play?,'" he reveals. "I love this tour because there is such a lack of ego with all the artists. It's nice to be able to just go in and hang out with everyone without someone's head exploding."

It's that laid-back mentality that has proven inviting to several of those on the current trek. "We all hang out after the show and eat dinner, and we got to know each other," Sunny admits. "It's pretty amazing."

"The fans were cool for this tour, but I really liked hanging out with everyone at the barbecue after the show was over," Gary agrees. "There was a lot of camaraderie among the artists on the tour. It was great to hang out and make new friends."

Another plus for Gary was having a certain singer-songwriter on the tour. "Josh Thompson wrote 'That Was a Tough Goodbye,' which is going to be on my new album, so it was great to get to know him better."

While Gary says he has never been able to write on the road, Sunny was thrilled with the new songs and co-writers she's found. "Eric Paslay and I started a song and we're going to finish it once the tour is over," she says. "I also had friends come out on the road with me to write. One of my favorite memories was singing a new song that I wrote, "Carolina on the Line." It's one of my favorite songs to sing, and it's so cool for me that the first time I did it for an audience was on this tour. It's just me and a piano, so it's a little different from anything I've ever done before."

Other artists on the tour included Corey Smith, Maggie Rose and Drake White. Rodney Atkins, whose played on some of the tour's dates, and his son Elijah were hanging out backstage at the Nashville. The Tennessee native came out to enjoy the show, but didn't perform, because he thought originally thought he'd be out of the country for this stop.