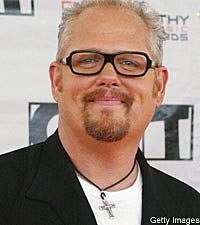 Cledus T. Judd, known for his humorous parodies that spoof some of the biggest hits in country, has done it again. Changing the lyrics to Brad Paisley's recent hit, 'Waitin' on a Woman,' Judd now has his first political theme song -- 'Waitin' On Obama.' (Listen to the song below.)

"It's not pro-Obama," Judd explains to Nashville's Tennessean newspaper. "I'm not going to pull a Natalie Maines and start bashing the president. You've seen what it's done to (the Dixie Chicks).

"He's our president," Judd continues. "You've made us a bunch of promises, now bring it on. We need progress and we need it quick because the whole country is in a mess and it affects every walk of life, from a farmer to a Wall Street guy. It's about to kill us."

'Waitin' on Obama' is the first single from Judd's upcoming album, 'Polyrically Correct'. Also on the CD are a Brooks and Dunn spoof, 'Garth Must Be Busy,' as well as one on a George Strait hit, 'I Saw Garth Today.'