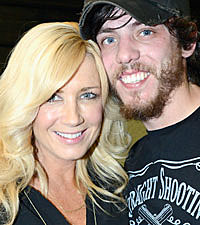 Chris Janson admits the first time he heard his hit "Better I Don't" on the radio, he had a very emotional reaction. "I cried," he tells The Boot. "I'm serious. It's so humbling that anyone would pay attention to my music, whether it would be anything that Tim McGraw records or anything else records. If it's my music that I wrote, it's a blessing. It's a dream come true."

Chris, who co-wrote Tim's hit, "Truck, Yeah," cut his teeth writing with rock and rollers, including former Guns N' Roses members Duff McKagan and Izzy Stradlin. Surprisingly, he says there's not that much difference when writing for country versus rock. "As songwriters, we call try to come from the same place," he tells The Boot. "We just want to make cool songs about cool stories."

For his debut album, he wrote with his songwriting buddies in Nashville, including Pat Bunch, Mark Green, Jimmy Yeary, and Ben Hayslip, but his favorite co-writer is his wife and Inside Music Row reporter , Kelly Janson. Though there are plenty of Music Country power couples to look up to, he says he and Kelly just focus on their own path. "As a couple, we just do our own thing, we live our own life. We try not to look at anybody else's way of going," he says. "It's hard enough to wake up and be yourself every day, and a lot of people don't like to admit it. We just try to be the best we can be as a couple and I think we've got it going on. I love her to death."