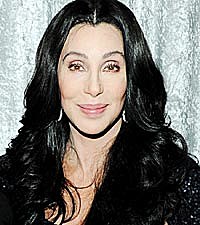 Cher is going country, according to famed Nashville producer Mark Bright. The studio veteran has added the pop culture icon to his impressive production resume, which includes albums by Carrie Underwood, Rascal Flatts, Reba McEntire and Sara Evans, just to name a few.

"Cher knows that her listeners also listen to country music," Mark explains to Silk & Denim Music. "So she felt it was a natural thing to develop a country music relationship.
"

Mark met Cher through a mutual friend, Songwriters Hall of Fame member Desmond Child. "Because we know each other," Mark says, "when she came to Nashville she thought of me."

There's no word on a release date for the project, which is said to be country/pop. Among the rumored collaborators is songwriter Diane Warren, who walked away with the Golden Globe for Best Original Song for 'You Haven't Seen the Last of Me,' which was performed by Cher in the 2010 musical 'Burlesque.'

The musical pairing between the ladies originally dates back to 1989, when Cher triumphantly returned to radio with the Diane-penned classic 'If I Could Turn Back Time.' The award winning songwriter is no stranger to country music, writing Sara Evans' 'I Could Not Ask For More' and LeAnn Rimes' mega-hit, 'How Do I Live.'

Although Cher has been tight-lipped about her foray into country music, Mark's confirmation offers hope to rabid fans who crave new music from the living legend. The new album would mark her first studio album since the release of 'Living Proof' in 2001.

Filed Under: Cher
Categories: Concert News
Comments
Leave A Comment
Back To Top