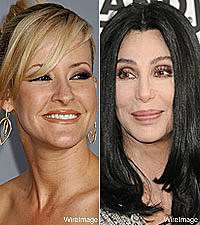 When Natalie Maines made the announcement in 2008 that she needed to step away from music and take some time off, the Dixie Chicks were forced into unexpected hiatus. By the time 2009 rolled around, fellow Chicks, Emily Robison and Martie Maguire were anxious to get back into the studio with Natalie and begin working on the Dixie Chicks' eighth album. But Natalie was reluctant and still unwilling to return to music.

By now, the sisters were getting nervous.

"This is what I know. What will I do? I don't have a college degree!" Martie remembers feeling at that time.

"I was fearful on a lot of levels," Martie tells Out magazine. "First of all, I turned 40 last year. That's frightening on so many levels as a woman. Then, I just did not have an outlet for creativity. In this industry, success can be so fleeting. At the end of the day what we desire the most is longevity. We don't feel like we need to constantly be in the public eye or winning awards, but we definitely want to be relevant on some level in the music industry. If you're not playing music, you just feel like time is ticking away."

Ironically, it was just five minutes of time in Martie's life at a backstage meet-and-greet in Las Vegas -- on her 40th birthday -- that totally transformed fear into fresh hope, and pointed her in an exciting new direction with her music.

"My birthday wish was to go see Cher in Vegas," she recalls. "I've got a few connections, so I was able to go back and meet her. I've been a fan for so long. Meeting her face to face was such a thrill.

"She could tell I was kind of down and when she said, "OK, who is turning 40?" I said, "A reluctant me." She took me by the hand and walked me into the back hallway. She talked to me for about five minutes, which seemed like an hour ... about

"She almost brought me to tears. That was life-changing for me. I felt like I had a whole new outlook after that!"

Indeed, that very year, Martie and Emily would form the Court Yard Hounds. By January 2010, they announced their first project as a duo and released their self-titled debut in May 2010. The Court Yard Hounds appeared and performed for the first time as a duo at the SXSW showcase in Austin, Texas on March 18, 2010.

Looking back, Cher not only helped Martie overcome her worries about turning 40 ... the pop superstar, in five magical minutes, saved the day, filling the Dixie Chick/Court Yard Hound singer with confidence that the best was yet to come.

"She totally did!" Martie agrees.