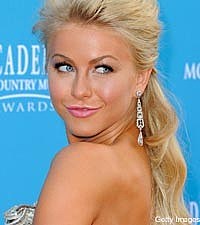 Despite reports in May stating that Julianne Hough would be returning to the set of 'Dancing With the Stars' this year, the dancer/singer/actress says her plans are still uncertain.

"It's a little too soon to tell," she admits to 'Entertainment Tonight.' "They have to cast the celebrities and all that. Because of 'Dancing With the Stars' and 'Footloose' overlapping with schedules, I think we're just going to have to cross that bridge when we get to it. It's not a yes or a no."

'Footloose' faced a long delay when both Zac Efron and Chace Crawford withdrew as the male lead for the film. But, according to Julianne, her new co-star is the perfect fit for the role. "I didn't know anything about Kenny Wormald before we did our screen test together but he's really fabulous and so talented as an actor and a dancer. I think he's going to be really great."

Julianne will have her big-screen debut this fall, when she appears in the upcoming flick, 'Burlesque,' opposite Cher, Kristen Bell and Christina Aguilera. "I think 'Burlesque' is going to be a really great movie," she gushes. "Everybody loves a good musical. It's not corny. It's beautifully done. It's sexy. It's everything you want to see -- dancing, singing. I think it's a great, great storyline. And the fact that Cher's in it and she sings in it. It's such a ground-breaking thing to have her back out there singing and acting on screen."

In addition to her upcoming acting roles, Julianne has been all over the headlines in recent weeks, thanks to her rumored relationship with 'American Idol' host, Ryan Seacrest. But while the two have been spotted getting cozy together both in Los Angeles and Nashville, she refuses to spill any juicy details. "If you guys want to hear anything about boys or relationships, you're just going to have to listen to the music, 'cause it's all in there," she says coyly.

Getting ready to release her sophomore album, 'Sizzle' in November, the 21-year old says her fans will learn more about her with the new CD. "It's been almost four years and I'm growing up a bit so the lyrics are a little more mature, a little more edgy -- and I'm really enjoying it. I feel like this is really who I am."