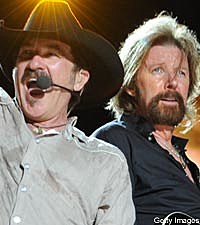 Brooks & Dunn, the most awarded duo in country music, are set to release their third greatest-hits compilation late this summer.

GAC reports that the career-spanning '#1s ... and then some' will be released on September 8 and will feature a whopping 30 tracks, 23 of which have topped the country charts. The duo's first four singles, taken from their debut album 'Neon Moon' are featured on the new collection as well. All four of those singles reached No. 1 on the country chart.