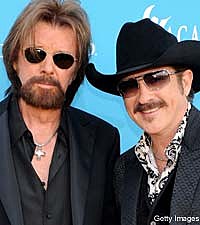 Ronnie Dunn needs to keep his mouth shut for a few more weeks.

Brooks & Dunn have announced their Last Rodeo tour will resume in Indianapolis, Ind. on July 16. Several June and July dates on the trek had to be postponed after Ronnie became ill and doctors put him on strict vocal rest.

The duo are more than making up for their absence, as they've also announced an additional three cities on their tour: Oklahoma City, Okla. (August 20), Little Rock, Ark. (August 21) and Holmdel, N.J. (August 28). They have also asked Miranda Lambert, Sara Evans and country music legend Merle Haggard to appear on select dates for the final leg of the tour.

"[I'm] getting better every day," Ronnie reports. "Kix [Brooks] and I will be raring to start where we left off, and go for three additional dates to say thanks to all the fans for 20 years of showing us the love!"