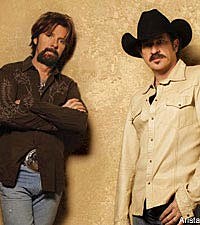 Brooks & Dunn are about to embark on their Last Rodeo tour, bringing to an end their 20-year career as one of the most successful country music duos of all time.

For those fans who have been taking notes for the past two decades, it's mind-blowing to realize that Kix Brooks and Ronnie Dunn won the CMA Vocal Duo of the Year award every year between 1992 and 2006, except for 2000 when Montgomery Gentry nabbed the prize. Their ACM awards were also numerous, with the pair claiming Top Vocal Duo honors 16 times starting in 1991.

When Kix and Ronnie sat down to chat with radio personalities during Country Radio Seminar in Nashville last month, they channeled their humble upbringing by recognizing the country greats who blazed a trail for them to follow, which is why they're eager to donate the proceeds of their last concert to the Country Music Hall of Fame.

"That first station that was country music all the time ... there's this heritage, there's over a thousand stations that play our music, and it allows us to be a part of what country music used to be," said Kix. "A prime example is two blocks from me growing up in Shreveport, La. is where Johnny Horton lived. I remember still when I was a kid when he got killed, his wife Billie Jean was married to Hank Williams before that. I took Ronnie over to their house. It was very humble. It was not even what you would consider a middle-class house these days. It was probably eight- or nine-hundred square feet. That was Hank Williams and Johnny Horton's home ... both of them lived in that house with Billie Jean. So it just kind of tells you what those guys did in terms of pioneering and building this thing up."

"Ronnie and I just fell right into it in 1990," Kix continues. "We were selling millions of [records], but it's because of those people and that heritage, and everybody there worked so hard to help us. It's really important that we do not forget that, take that for granted and get above our raisin.'"

"I think back in the day, Hank Williams ... was almost a pop phenomenon," Ronnie added." It gives us a good reference to go back and check our reality sometimes to see how far we've come."