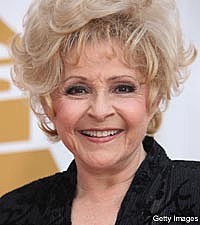 As a young (make that very young) girl, Brenda Lee made television appearances along such legends as Steve Allen and Ed Sullivan before she was even in her teens. And she was headlining shows in Las Vegas before she could even drive. Taylor Swift, LeAnn Rimes and Tanya Tucker are just a few of the young women who owe a debt of gratitude to 'Little Miss Dynamite' for paving the way -- and blowing the doors wide-open with her one-of-a-kind powerhouse voice.

During a recent visit to the Country Music Hall of Fame and Museum, Brenda, who just turned 65, reflected on her amazing career by sharing with a group of visitors a number of rare film clips capturing her early performances. The singer -- a member of both the Country Music and Rock 'n' Roll Hall of Fame -- is currently the subject of a museum exhibit detailing her career. With one of her signature songs being 'Rockin' Around the Christmas Tree' -- a perennial favorite and one of the best-selling holiday songs of all-time -- it was the perfect time to visit and reminisce.

In addition to watching and listening to herself mature on the screen as each clip was introduced, Brenda talked about her close friendship with the late Marty Robbins, who was involved with her husband, Ronnie, in several business ventures. Brenda noted that every Friday night they would have a Mexican food night together.

She also talked about her associations with early rock acts including Elvis Presley, the Beatles (who were her opening act on an early European tour) and the Rolling Stones, especially Keith Richards, who still listens to Brenda's 1960 smash, 'Sweet Nothin's' on his iPod before every show.

When it comes to Brenda's signature 'do, the singer says Dolly Parton and Loretta Lynn still have great "hillbilly hair" but few of the current crop of country artists can measure up. "Carrie Underwood's got potential. She keeps inching up a little bit at a time. And Taylor's got a lot to work with. She could be at number one on the hairdo list! But I think Dolly and I are carrying that banner." After a contemplative pause, the sharp-as-ever Brenda added, "Oh, and Marty Stuart!"

"Brenda Lee: Dynamite" is open at the Country Music Hall of Fame and Museum through June 2010.