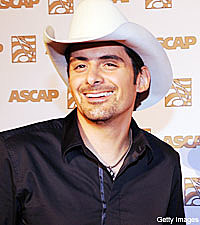 One of Brad Paisley's many talents is being able to pull off a good prank. From hiding rotten chicken in Blake Shelton's tour bus to trapping Jack Ingram in a cage (the list goes on and on), Brad is constantly playing jokes on his tourmates. And don't expect him to change his ways anytime soon.

"When you're on the road, it can get pretty boring," Brad tells PEOPLE. "It makes me think of the British version of 'The Office.' It's kind of a daily grind. Pranking is one way to battle that boredom."

Brad admits that he's not always working alone. "I have a great crew that has really helped my pranking reputation," he explains. "They'll say, 'You know, Saturday is Rodney Atkins last day on tour. Can we talk about some ideas we have? I get credit for being smarter than I am about it."

While he likes to have fun at home, as well, Brad says it's a less harmful kind of fun when he's with his family. "My wife [actress Kimberly Williams-Paisley] has a great sense of humor, but it's different than mine. It's much smarter and more mature. She doesn't like to make people uncomfortable so she doesn't like pranking. So she'll teach Huck how to do something that will make me laugh, or dress him in something hilarious, then send him to find me knowing he'll crack me up."