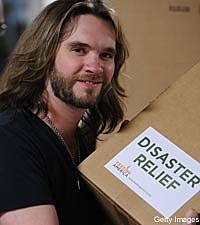 Bo Bice -- American Idol's fourth-season runner-up to Carrie Underwood -- announced on the FOX News show, 'Geraldo at Large,' that he will be donating all of the proceeds from his new single, 'Long Road Back,' to several relief programs aiding victims of Nashville's devastating flood.

"Nashville was hit hard by the flooding," says Bo, whose log cabin sustained foundation damage during the flood (quote via CMTT). "We're blessed that we live on a hill, so everything washed down ... Unfortunately, our neighbors below us are really good friends of ours, and their basement got flooded. Everybody has either been hit, or family members or somebody they know has been hit or flooded."

To help those who have been hit, Bo is donating all proceeds from the sale of 'Long Road Back,' exclusively on iTunes, to help flood victims through Second Harvest Food Bank, American Red Cross and the Salvation Army. [Download the song here.]

"We lost a large portion of our historic city, but we are going to make it through this hard time together," Bo vows. "In this tragedy, our community has been made stronger with love and support of so many good-hearted souls."

And like so many others who have survived the great Nashville flood, Bo is counting his blessings.

"We count our fingers and toes each day," he reflects. "The Lord keeps putting breath in our lungs. You can buy houses, you can buy cars and all this other junk. You can't take any of that with you. We've got good friends and family that are safe ... and we're glad we didn't lose anybody. Our prayers definitely go out to those who did."

On May 6, Bo appeared on 'Flood Relief: Vince Gill and Friends,' helping to raise over $1.7 million for local organizations. He is performing May 12 at the 'Country Cares' benefit concert at Nashville's Center Stage, and will also be hosting a benefit show on June 12 at Limelight in Nashville, with all proceeds going to MusiCares.