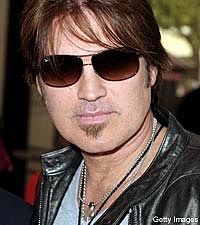 On his new single, 'Lately,' with his super-group Brother Clyde, Billy Ray, who is experimenting with new sounds on the project, will duet alongside New York rapper King Phaze. Phaze is best known for his 2009 guitar-sampling hip-hop single, 'Yonkers Anthem,' featuring DMX, Styles P and Sheek Louch.

"I just finished an album with a group of guys I met up in Vancouver, when I was doing a film called 'Christmas in Canaan,' that sounded a lot like Nirvana meets Alice in Chains," Cyrus told The Boot at Saturday's premiere of his family action-comedy 'The Spy Next Door' in Los Angeles. "I combined that with my Southern rock and roll roots, and we came up with a unique sound and unique band."

"The album is coming out very soon," Billy Ray reports. "'Lately,' that is a really powerful record about the sign of our times ... I just got back from Iraq and Afghanistan. Seeing what is going on in our world, the song 'Lately' is going to speak to a lot of people. The music is going to translate."

Billy Ray stars opposite Jackie Chan and George Lopez in 'The Spy Next Door,' in theaters Jan. 15. His 11th record, 'Back to Tennessee,' came out last April.