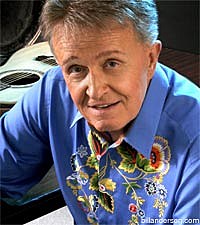 Over the last five decades of his distinguished career, Bill Anderson has become known as many things -- "Whisperin' Bill," TV host, Grand Ole Opry member and a multiple CMA Award winner ... But at heart, the role he's always cherished most is being a writer. Appropriately enough, the title of his new album is simply 'Songwriter.'

Talking with The Boot over lunch at The Palm in downtown Nashville, Bill admits he did consider another title, but as the project progressed, 'Songwriter' seemed the obvious choice. "The original concept for this album was to call it 'Good Time Gettin' Here,' which is one of the songs," Bill says. "I sat down and really tried to think: What have I not done in my career? I've never done an album that really shows my sense of humor ... After I cut the first four or five tracks in that vein, I started thinking, 'that's cute, but it's like a one trick pony.' It's really too narrow of a focus. So then I began to think of some songs that I've had that had not been recorded that I was proud of, and the whole thing just evolved. One day I said, 'Why don't we just call it 'Songwriter?' Basically if I'm anything, I guess that's what I am."

That desire to communicate began when Bill was just a little boy in Georgia. "I wanted to be any kind of a writer when I was growing up. When the teacher would say in school that our assignment was to write something, everybody would moan and groan, and I'd jump up and say, 'Yippee! I get to write!'" he recalls. "My three loves in life have always been any kind of writing, sports and country music. I was a sports writer when I first started out. I did some work for the Atlanta Journal Constitution, and for some weekly papers around Atlanta, but when I got to the University of Georgia and met a couple of guitar pickers, that focus shifted to music and I started seriously to try to write songs."

Early in his career, Bill also worked as a disc jockey, which fueled his love of music and continued to pique his interest in songwriting. "Working in radio, listening to the songs that came in, studying the songwriters that had their name on the records back then, it just lit a fire in me," remembers Bill, who penned 'City Lights' while working at WJJC radio in Commerce, Ga. The song became a hit for Ray Price and paved the way for Bill to move to Nashville and sign with Decca Records. He scored his first top ten hit in 1960 with 'Tips of My Fingers.'

Bill continued to be a staple on the country charts with such hits as 'Mama Sang a Song,' 'I Get the Fever,' 'Po' Folks' and 'Still.' He was the first country artist to host a network game show when he took the reins of 'The Better Sex.' He appeared for three years on the ABC soap opera 'One Life to Live' and hosted such shows as 'Fandango' and 'Opry Back Stage' during the Nashville Network's heyday. He's written three books, including his current project, 'Letters to My Fans: Volume One.' And of course, he's been a beloved member of the Grand Ole Opry since 1961.

However, Bill Anderson has never been one to rest on his laurels. In recent years, he has continued to tour all over the U.S. and Canada, as well as maintain his Opry appearances, and he's turned even more attention to his first love -- songwriting. His credits as a songwriter include Steve Wariner's Grammy nominated 'Two Teardrops,' the Kenny Chesney hit 'A Lot of Things Different,' which he co-wrote with Dean Dillon; and 'Jonah, Job and Moses,' which earned a Gospel Music Association Dove Award for the Oak Ridge Boys. He's also won two CMA Song of the Year honors -- in 2005 for the Brad Paisley/Alison Krauss hit 'Whisky Lullaby,' which he co-wrote with Jon Randall, and in 2007 for the George Strait hit 'Give It Away,' which he wrote with Buddy Cannon and Jamey Johnson. He was also the first country artist to be named a BMI Icon.

Bill says he decided to rededicate himself to his songwriting in the early 90s when Steve Wariner took 'Tips of My Fingers' to the top of the charts again. "I hadn't had a song in the charts in a long time," he says. "It had been 10 years or so and I was thinking, 'The industry has changed. The music has changed. It's passed me by.' And then all of a sudden, I remember exactly where it happened. It happened at his # No. 1 party. I'd never been to a No. 1 party. They didn't have No. 1 parties back when I was writing No. 1 songs. I was standing there at Steve Wariner's No. 1 party thinking, 'How cool is this? I could get used to this!' And it dawned on me [that] this song was written in 1960. This song is 32 years old and it's speaking to somebody 32 years later. Wait a minute! If I could do that, I could do that some more!"

Bill admits a few techniques have changed when it comes to writing songs. "I'm from the old Hank Cochran school of writing. Hank used to say, 'You can't put your title in a song too many times.' I always believed that, but today, you've got to fight to do that," Bill says. "I never counted the number of times that we said 'give it away' in 'Give It Away,' but I bet it was in there 25 times. So many of these writers today are influenced not by old country music, but by rock music and evidently the rockers don't subscribe to that theory. They'll put the title in there at the end of the chorus maybe and kind of hide it. I always liked to come back to it. Tell them what you're writing about. Drive it home."

When asked what makes a great country song, Bill responds, "If I had to say one thing, I would say a song that touches people emotionally. People ask me how can you write hit songs in 1957 and still write them in 2007? I don't think human emotions have changed all that much. We still laugh. We still cry. We still feel things and to me a song that connects with people, that really touches somebody, that's the key." 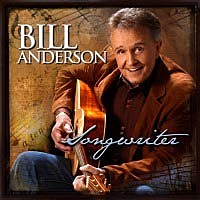 On his new project, Bill has subject matter that taps into every emotion. 'Good Time Gettin' Here' celebrates the joy in the journey. 'If Anything Ever Happened to You' is a tender love song from the perspective of a couple who have been married 50 years. 'One Bad Memory' is a look at a love gone wrong. 'The Songwriters,' written with Gordie Sampson, is a clever ode to the life of a tunesmith.

His new 12-song collection also features collaborations with Jon Randall, Billy Montana, The Grascals' Jamie Johnson and Brad Paisley, who co-wrote 'If You Can't Make Money,' as well as contributes some of his signature guitar licks. "That started with Brad Paisley," Bill says of 'Money.' "Me and Jon Randall went out to his house to write with him and this was right as the economic crisis thing was all over the news."

Bill and Brad also wrote a song on Brad's 'American Saturday Night' album titled 'No.' "It's special to me because the story actually came from real life," says Bill. "I had a sister who was almost five years younger than me and our grandfather was a minister ... My little sister went to our grandfather one day and said, 'Granddaddy, God doesn't answer prayers. I prayed for a pony and he didn't give me one.' And my grandfather put his arm around my sister and said, 'Well honey, God answered your prayer -- he told you no.' So that's where the idea came from -- every prayer gets answered, even though sometimes the answer is no."

'Thanks to You,' written with Brad Crisler, was inspired by a request Bill got from a fan. "I got an email from a man in Cincinnati, and he told me that he was coming to the Opry and bringing his wife to celebrate their 35th wedding anniversary," Bill recalls. "He said, 'I'm not very good with words, but I know you are. I'll be on the third row and I want you to sing a song for me and my wife that would tell her in music how much I love her and how much I appreciate her.'

"It suddenly hit me. I don't have any songs like that," Bill recalls with a laugh. "I've been running around singing 'we called it quits' and 'gonna have a wild weekend' ... and that don't really fit. So it dawned on me that I didn't really have what I wanted in a way of a really positive love song. I went to Brad Crisler, who I've been writing with, and I told him that story and said, 'Let's really try to write an all encompassing love song for somebody whose been married for 35 years.' And that's when we wrote 'Thanks to You.'"

Bill Anderson has spent his life sharing stories -- his own and other people's -- in song, and he has absolutely no plans to retire. "As long as I still enjoy it and feel like maybe I've got a little something to contribute, I'll keep doing it," he insists. "When I had him on my radio show, I asked Willie Nelson, 'When are you going to retire?' He said, 'I don't do but two things. I play golf and make music. Which one do you want me to quit?' So that's kind of the way I feel. Retire from what? It's hard to give it up if it's in your blood."