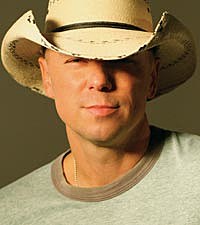 The Academy of Country Music has announced the 2012 winners of awards that will not be televised on the April 1 broadcast.

Kenny Chesney is this year's recipient of the Crystal Milestone Award, recognizing not only his 10.5 million tickets sold over 11 national tours, but also his success in popularizing the country genre as a whole and helping other acts, regardless of genre, gain fans. Past Crystal Milestone honorees include Garth Brooks and Sugarland's Jennifer Nettles.

Vince Gill is the winner of the 2012 ACM Career Achievement Award. The trophy is given to a musician who has "advanced the popularity and acceptance of country music through their endeavors in the entertainment industry in multiple areas during the preceding calendar year." After the October 2011 release of his critically-acclaimed album, 'Guitar Slinger,' the country icon was honored with 'Vince Gill Week' in Nashville, along with a Grammy nod for the album's first single, 'Threaten Me With Heaven.'

ACM voters have chosen Alan Jackson as this year's winner of the Jim Reeves International Award, recognizing his "outstanding contributions to the acceptance of country music throughout the world." The 'So You Don't Have to Love Me Anymore' singer toured Australia last spring, followed by Sweden and Norway last summer.

Emmylou Harris, Ricky Skaggs, Dwight Yoakam and producer/songwriter Billy Sherrill have been honored with the Cliffie Stone Pioneer Award, which recognizes musicians "who are pioneers in the country music genre."

Dallas Davidson is the 2012 ACM Songwriter of the Year recipient. The Georgia native has co-written a laundry list of hit songs in the past year, including Luke Bryan's 'I Don't Want This Night to End,' Lady Antebellum's 'We Owned the Night' and Craig Morgan's 'This Ole Boy.'

Other 2012 ACM Award winners include:

Nightclub of the Year: Billy Bob's Texas – Ft. Worth, TX

Producer of the Year: Frank Liddell

Percussionist/Drummer of the Year: Shannon Forrest

Guitarist of the Year: Kenny Greenberg