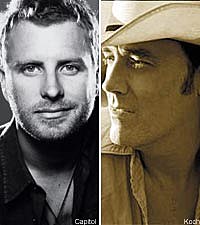 The 2010 CMA Songwriters Series returns to the venue where it all began -- New York City's Joe's Pub -- on March 25. This year's lineup includes Dierks Bentley, David Lee Murphy and two of Nashville's hottest songwriters, Jim Beavers (co-writer of Dierks' hits 'Trying To Stop Your Leaving' and 'Sideways,' Gary Allan's 'Watching Airplanes,' and Billy Currington's 'Don't') and Bob DiPiero (Montgomery Gentry's 'If You Ever Stop Loving Me,' George Strait's 'Blue Clear Sky,' and Brooks & Dunn's 'You Can't Take The Honky Tonk Out of the Girl'). Throughout the evening, fans will be treated to some of their most successful hits, as well as the personal stories behind the songs.

In recent years, David Lee has put his singing career on the back burner as he focuses on his passion of songwriting. "I really love being in the position that I'm in right now with being able to write songs," David Lee tells The Boot. "Other artists call me up and go, 'Hey man, I need a particular kind of song.' I get to live on my farm, write songs, and just love doing what I'm doing. I get to be creative and still make music." Recent chart toppers penned by the 'Dust on the Bottle' and 'Party Crowd' singer include Jason Aldean's 4-week No. 1 hit, 'Big Green Tractor,' and Kenny Chesney's 'Living in Fast Forward.'

"The CMA Songwriters Series is something I've wanted to be part of for a long time, but the timing just never worked out until now," Dierks says. "I love all the small clubs and songwriter venues around the city. The vibe and acoustics at Joe's Pub are great. It's fun to break it all back down, get rid of the big stage and the lights and video screens, where it's just you and a bunch of your buddies and a couple of guitars. It's really intimate, and you're reminded real quick how important the songs are, and that they are the foundation of the country music that'll stand the test of time."