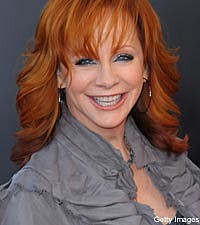 Reba McEntire will host the 45th Annual Academy of Country Music Awards, Sunday, April 18, live from the MGM Grand in Las Vegas. It will be the superstar's 12th time hosting the show. The singer, who scored big laughs as host in 2009, is also slated to perform during the star-studded gala, along with Kenny Chesney, Carrie Underwood, Keith Urban, Rascal Flatts. Other performers and presenters will be announced soon.

Reba's 12-time hosting gig isn't the only dozen to her credit -- she's a 12-time ACM award winner as well.

"No one does it better than Reba McEntire," says Orly Adelson, president of dick clark productions and executive producer of the awards show. "She always brings spunk and personality to the show and we are honored to have the Queen of country music back to host the Awards for the 12th time."

The day after the ACM Awards, Kix Brooks and Ronnie Dunn of Brooks & Dunn will receive the Academy's Milestone Award in recognition of their 20-year career during a tribute concert special, ACM Presents: Brooks & Dunn – The Last Rodeo. The duo holds the record for the most wins of any artist in Academy history with 26 awards, including three Entertainer of the Year trophies and 15 Top Vocal Duo wins, eight of which occurred consecutively from 2000-2007.

Ticket information for the ACM Awards and the Brooks & Dunn special are available at the official Academy of Country Music website.