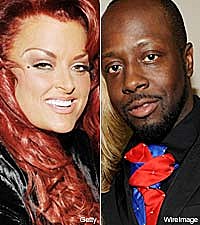 Wynonna will join her good friend, Haitian-born musician Wyclef Jean, for their first-ever collaboration, as the two are set to perform on CBS' 'The Early Show.' On Feb. 6 -- the eve of Super Bowl XLIV, Wy and Wyclef will be in Miami, where talk will likely turn to two diverse topics -- football and Haiti -- as they join this special edition of the program.

Wy has been a tireless champion of such causes as AIDS, cancer, poverty and children's and women's charities over the years. She now adds Haitian relief to that list, urging fans on her website to support Wyclef's efforts in his devastated homeland.

"If you are looking for other ways to lend your support, please join Wyclef Jean in his efforts to raise funds for his beloved Haitian community through his non-profit organization, Yele Haiti," she writes.

Fans who wish to support the Haitian relief effort in this way can text "Yele" to 501501, which will automatically donate five dollars to the Yele Haiti Earthquake Fund, or visit Yele.org and click on 'Donate.' Yéle's community service programs include food distribution and mobilizing emergency relief. Grammy-Award winning musician, humanitarian and Goodwill Ambassador to Haiti, Wyclef Jean, founded Yéle Haiti in 2005.