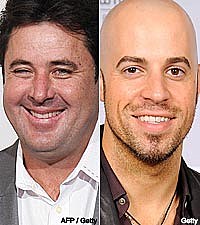 With the release next month of his band's new album, 'Leave This Town,' 'American Idol' alum Chris Daughtry reveals that the new project has a "bit of country flavor," with guest vocals by a country icon.

"Last time we had Slash on the record, and for this one we had Vince Gill, who I think is one of the greatest country vocalists out there," Daughtry told PopEater in an exclusive interview. "He did some great harmonies and vocal bits for the song."

Daughtry explains that he is working with a mixture of country, rock and even dance beats on 'Leave This Town.'

"I just think the whole record is a body of work, and I think listening to it from beginning to end is going to take the listener through an entire experience."

Vince, who's said he rarely turns down the opportunity to guest on an album, can also be heard on Steve Martin's new banjo album, singing 'Pretty Flowers' with Dolly Parton.