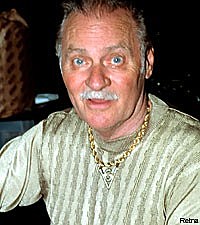 Vern Gosdin, whose country hits included the chart-topping 'Set 'em Up Joe,' 'I Can Tell By the Way You Dance (You're Gonna Love Me Tonight)' and 'I'm Still Crazy,' died at a Nashville hospital early Wednesday morning. He was 74.

According to Nashville's Tennessean newspaper, Gosdin's administrative assistant Dawn Hall said the singer suffered "a pretty bad stroke" about three weeks ago. He died peacefully in his sleep.

Born in Woodland, Ala., on August 5, 1934, Gosdin was one of country music's most hardcore traditional singers, although his musical career encompassed a variety of genres. A one-time bandmate of The Byrds' Chris Hillman, he also performed with his brother Rex in the California-based band The Golden State Boys, and later as The Gosdin Brothers.

Gosdin charted consistently throughout the 1980s, with hits such as 'If You're Gonna Do Me Wrong (Do It Right),' 'That Just About Does It' and 'This Ain't My First Rodeo.' In 1989, his Top 10 hit 'Chiseled in Stone,' co-written with Max D. Barnes, earned CMA Song of the Year honors.

An obvious influence on a new generation of country acts, Gosdin's 1982 hit, 'Today My World Slipped Away,' became a chart-topper for George Strait in 1997, and Brad Paisley's 2003 album, 'Mud on the Tires,' included his version of Gosdin's 1990 hit, 'Is It Raining at Your House.'

Earlier this year, in an interview with The Boot, Jake Owen said of Gosdin, "He's not as respected as he should be. To me, he's one of the greatest singers I've ever heard interpret a song. He's just got this coolness about him."

"You can't go into a bar room that plays real country music without hearing Vern Gosdin," echoes Jack Ingram. "'Chiseled In Stone' is as sad a country song as 'He Stopped Lovin' Her Today,' and 'Set'Em Up, Joe' is a call to anyone who's ever had a reason to be in a bar like that to begin with ... Vern Gosdin's voice was truth, the hardcore country kind. Any time I heard him on a jukebox, my car radio or my old tape of 'Chiseled in Stone,' I knew there was a lot about life and loss and love left to learn."

Funeral arrangements for Gosdin are incomplete.

Filed Under: Vern Gosdin, VernGosdin
Categories: Legends, R.I.P.
Comments
Leave A Comment
Back To Top
What Is Country Music? For Lee Brice, It's Personal