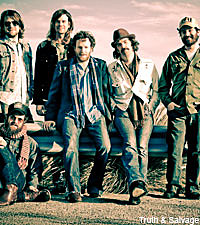 Truth & Salvage Co. are letting their country roots show on 'Pure Mountain Angel,' the just-released single from their self-titled album.

Although some classify the band's sound as rock -- perhaps because Chris Robinson of the Black Crowes produced their debut album -- four of the band members' roots go deep into Asheville, N.C. That's where Bill Smith, Scott Kinnebrew, Walker Young and Joe Edel were in the band Scrappy Hamilton. After the four moved to Los Angeles, they met Tim Jones and Adam Grace and formed Truth and Salvage Co. in 2005.

'Pure Mountain Angel,' filled with slide guitar, piano and four-part harmonies, is a fan favorite. Walker says the song's meaning strikes a chord in all of the band members' hearts. "[It is] our stand, our take on life," he says. "It tells the tales of all six of us and reminds us that, though we are blessed with fortune, this life is as serious as a heart attack."

Truth and Salvage Co. are currently on tour. Their next scheduled concerts are October 28 in Napa, Calif. and October 29 in Modesto, Calif. For a complete list of dates and cities, check here.

A free download of 'Pure Mountain Angel' from AOL radio may be found here. Watch the band perform the song on 'Jimmy Kimmel Live' below.