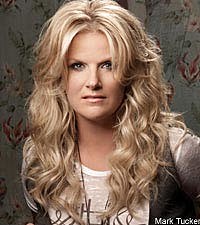 Trisha Yearwood is a cover girl on the latest issue of Good Housekeeping, but it turns out her mom Gwen was a fan of the magazine long before her daughter started appearing in its pages. Trisha explains how her mom's loyalty to the magazine actually saved her life.

"My mom never subscribed to anything else," Trisha tells Good Housekeeping. "She credits an article for the early detection and lifesaving treatment of her cancer. She read about a woman with cancer who had very few symptoms, but her hair was falling out. My mom's hair was thinning, so that sparked her. She hadn't been to a doctor in years, and she went in for a checkup. It turned out she had Stage III uterine cancer. She's great now; she's been healthy for over 10 years."

Also in her Good Housekeeping interview, Trisha hints at a future tour with hubby Garth Brooks and reveals her plans to sing in the Big Apple before she hits the big 5-0.

"Garth and I have talked about doing one more tour together once the girls are grown and we're not too old to get off the bus!" Trisha says. "And I'd love to do a Broadway show, but it's going to have to be when Garth can move to New York for a year and hang out with me."