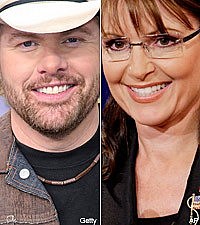 Toby Keith is talking about his patriotic anthem 'Courtesy of the Red, White and Blue (The Angry American)' on an upcoming FOX News special hosted by Sarah Palin, but his appearance on the TV show appears to be news to the singer himself.

"Toby was not asked to participate nor has he ever done an interview with Sarah Palin," the superstar's publicist tells PopEater. Footage of Toby talking about the song was taped back in 2008, as was an interview with actor/hip-hop star LL Cool J who expressed his surprise to his Twitter followers, saying, "Fox lifted an old interview I gave ... to someone else and are misrepresenting to the public in order to promote Sarah Palin's show."

FOX has since announced it will remove the LL Cool J [real name: James Todd Smith] segment from Palin's program, which is titled 'Real American Stories.' The network writes in a snarky letter to TV Newser, "As it appears that Mr. Smith does not want to be associated with a program that could serve as an inspiration to others, we are cutting his interview from the special and wish him the best with his fledgling acting career."

'Real American Stories,' which according to the Los Angeles Times will spotlight "real-life tales of overcoming adversity," debuts this Thursday (April 1) on FOX News.