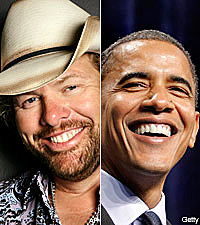 In spite of his recent controversial statement "that black people would say that [Senator Barack Obama] don't talk, act or carry himself as a black person," Toby Keith had some more positive things to say about the presidential candidate recently.

While promoting his new movie 'Beer For My Horses' in Los Angeles, Keith was asked about the role patriotism is playing in the election. He answered by praising Senator Obama.

"I think he's the best Democratic candidate we've had since Bill Clinton," Keith told reporters. "And that's coming from a Democrat."

Yes, Keith is a lifelong Democrat, despite assumptions otherwise. The country superstar also says he's been against the war in Iraq from the start. That's where he finds a kindred spirit in Obama.

"There's a big part of America that really believes that there is a war on terrorism, and that we need to finish up," Keith contined. "So I thought it was beautiful the other day when Obama went to Afghanistan and got educated about Afghanistan and Iraq. He came back and said some really nice things .... As far as leadership and patriotism goes, I think it's really important that those things have to take place."