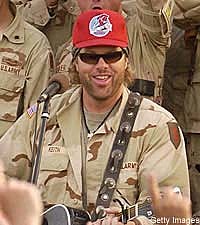 Toby Keith has made numerous visits to our military heroes overseas, but the singer also takes time to include them when he's meeting fans backstage at his concerts.

"I can't get to them all so I try to make them feel as important as I can from the stage. We try to let 100 [fans] back. If there's military, we always let them back because that's all I can give them is my service," says Toby. "They gave service to me, and all I can give them back is any service that I have."

Toby adds that those with military ID who visit his I Love Bar and Grill restaurants can also enjoy a free burger and beer on the singer. "If they come to my show, I get them back stage. If they come down front during 'American Soldier,' I pull them up on stage. I make sure to acknowledge them and honor them as much I can."

In spite of the current climate, with conflicts happening in more than one part of the world, Toby asserts that he'll continue to support our troops in any way he can, whether in war or "peace" time.

"Some day the wars will be over," he says, "and we'll be in a peace time, right? We'll be in a down time. We'll be between wars. We're either at war or we're between wars, we're never at peace. The whole existence of mankind, we're never at peace. Next time we're between wars -- and that is not an easy topic to bang on -- I'll still be doing this for my troops. I was doing it before. It just didn't come to the forefront ... I've done 140 shows in the desert. You see very little press on the national news about me doing that. It's because we don't go out and ask for that press. We quietly go on the USO tours -- for two weeks every years for seven years. We quietly do our thing, and we don't go seek ...we're not firing out Twitters or whatever it is, or Facebook stuff. If you want to go to the USO www.uso.com web site [you can] read about our journey in our diary. Me getting to go and see their faces light up and be on a base with 25 guys in the middle of nowhere on the Pakistan border is all I need for a reward."

One thing Toby doesn't need is people questioning his lack of actual military experience. "If I've got a guy who's popping off going, 'Oh, you do all this troop stuff, but you ain't ever enlisted' ... I didn't. There wasn't a draft, but my dad did, and I've been on the front line a lot. I've been on some bases on some front lines that a lot of enlisted people haven't. I have soldiers and marines [ask me], 'Where'd you go?' And I'll tell them, and they'll go, 'Dang, I didn't even go up there!' And they'll ask me questions: 'Was it dangerous? What did it look like? How far from air support were you?' And these are guys wearing uniforms right now. I don't look at that as a service as much as I look at it [as] an adventure for me. I get to go do stuff nobody gets to do. I get to take pictures and see the world that even TV cameras don't get to see sometimes."

Toby has just released his latest video,' 'Cryin' for Me (Wayman's Song),' a tribute to Toby's longtime friend, the late bassist and basketball player Wayman Tisdale.