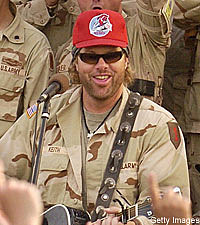 Toby Keith is planning yet another trip to the Middle East. But before he goes, he'll be recognized for his continued support of our troops.

Keith will soon embark on his eighth USO tour, this time performing for troops in Afghanistan. He will first travel to Washington, D.C., where he will receive the Distinguished Service Award from the Military Officers Association of America. The award honors civilians who actively support military personnel.

"There aren't enough words to describe just how grateful I am to our nation's troops," he tells CMT. "I've participated in several USO tours over the years, and I've seen firsthand their sacrifice. And I will not stop doing all I can to show my support and lift their spirits."

This is just one of several honors bestowed upon the country superstar for his commitment to the military.