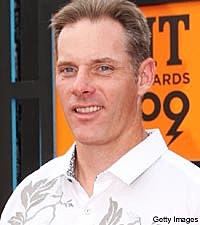 Kerry Collins is back to his day job, taking on the Pittsburgh Steelers tonight (Sept. 10) in the NFL's season-opener. But the Tennessee Titans quarterback spent the summer doing the other job he loves -- songwriting.

"It's a lot of fun," Kerry tells The Boot. "Obviously it's very different from football, but I'm a huge country music fan, so it's a great opportunity to jump into something I love. Hopefully it'll be something I'll do for a while."

Songwriting isn't just a hobby for the seasoned athlete. Kerry owns his own publishing company, called Blue Q, and has been writing with some of Music Row's most famed tunesmiths, including Lee Thomas Miller, the Warren Brothers, Jamey Johnson and Paul Overstreet (George Jones' 'Same Ole Me,' Randy Travis' 'On the Other Hand').

"It's that moment that every man does not like," Kerry explains of the song he wrote with Paul. "You're laying there with a woman and she looks up and says, 'What are you thinking about right now?' And he wants to go, 'Well I was thinking about football and fishing.' And you don't want to lie, but you tell her, 'I'm just thinking about love.' [laughs] It's a country song, there's no doubt about it!"

Kerry describes the song he wrote with Jamey Johnson as "dark, funny and slightly demented." The two bonded over being underdogs in their respective careers. "He's come back from adversity and put out what was the best record last year, bar none," the Titan says of Jamey. "It's been a thrill to get to know him. I just appreciate who he is as an artist ... What an unbelievable talent!"

The admiration is mutual. "When it was his time to go in and be the quarterback of the Titans ... I've never seen such a performance, such an inspiring story," Jamey told Nashville's Tennessean newspaper last year, after Kerry stepped in for troubled quarterback Vince Young and led his team to the best record in the NFL last season (13-3). "When you find somebody who has that kind of spirit, they always have the best stories to tell and have the best lessons to teach young people."

While Kerry has yet to hear one of his own tunes on country radio, he's getting close. George Strait put one of the quarterback's songs "on hold" for his last album, but ended up giving it back. And there's no word yet on whether that "demented" song will end up on a Jamey Johnson album, but you can bet someone will cut it.

As for Kerry's other job, he's looking forward to another playoff-bound season. "We had a good year by just giving it our best every week," he says. "We're focusing on coming together as a team, getting ready for a good season."