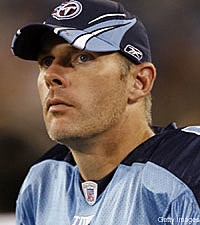 Kerry Collins is starting a second career that has nothing to do with football. The Tennessee Titans quarterback wants to be a country songwriter.

"I get a song idea in my head or some words or phrases," he tells Nashville's Tennessean newspaper. "There will be times when I find myself just racking my brain trying to think of more material to go along with it."

Living in Music City, it's no surprise that Collins would be caught up in the country scene. But his creative aspirations happened long before he ever set foot in Nashville. Citing Garth Brooks and George Strait as two of his biggest influences, Collins says it was back in his college days at Penn State that he first became enthralled by country music.

"I've always written stuff down, whether it be journal-type things or thoughts or poems, if you will, over the years," he says.

Collins has teamed up with famed manager Stuart Dill, whose clients include Jo Dee Messina, The Wreckers and Freddy Fender, to open up his own publishing company, called Blue Q. And he is certainly not lacking in other famous friends to help him. Collins has been spending his limited free time writing with hit songwriters like Ed Hill (Martina McBride, Faith Hill) and Billy Lawson (Trace Adkins, George Strait), as well as Grammy-nominated artist Jamey Johnson, who has taken Collins under his wing.

"The guy has been an inspiration to everybody in Nashville this year," Johnson says of Collins, who replaced troubled quarterback Vince Young early in the season. "When it was his time to go in and be the quarterback of the Titans ... I've never seen such a performance, such an inspiring story. When you find somebody who has that kind of spirit, they always have the best stories to tell and have the best lessons to teach young people."

Johnson insists he and his new friend have much more in common than people realize. "I was telling Kerry, 'I know what it's like to be the underdog -- the guy that hoped for so much but had very little opportunity, the guy that people didn't really expect great things from but really hoped great things for,'" says the 'In Color' singer. "When you go out there and finally get to show them what you are really made of, and you get that acceptance and the success, it's that feeling of affirmation that I think we both appreciate in the same way."

In spite of Collins new career aspiration, Titans fans don't need to worry about losing their favorite quarterback anytime soon. He is adamant that football is still his No. 1 priority. And so far, so good. The Titans have the best record in the NFL this season with 12 wins and just one loss.