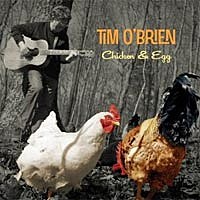 Grammy-winning artist Tim O'Brien addresses the age-old question of "which came first" with the simultaneous release of both 'Chicken & Egg,' the multi-instrumentalist's 13th solo album, out this week on Howdy Skies Records.

Labeled a "master of American folk music, Irish music, Scottish music" and "a fine songwriter and one of my favorite singers" by legendary guitarist Mark Knopfler, it should be enough that Tim O'Brien writes and plays a dizzying array of instruments on the album (mandolin, guitar, banjo, fiddle, bouzouki and piano, to be specific). Yet, he also turns in some effective vocal performances on the new album as well.

The Virginia-born musical veteran says of the 14-track collection, "It was time to make a more acoustic record -- more along the lines of a bluegrass thing, with an ensemble and not a lot of production: something pretty down-home, featuring a more consistent band."

"I figured out what songs would work best with these guys, then I began singing and playing them around the house for a few months before the session," Tim says. "These musicians can all play amazingly well and they play a lot better if they are backing up someone who knows what they're doing. We just went in, sat down and I started calling them off."

As a songwriter, Tim O'Brien has had cuts by the Dixie Chicks, Garth Brooks, Dierks Bentley, Nickel Creek and New Grass Revival. He was also a founding member of the classic bluegrass outfit Hot Rize and reached the Top 10 in 1990 with 'Battle Hymn of Love,' a duet with Kathy Mattea (who also recorded Tim's 'Walk the Way the Wind Blows.') Martie Maguire of the Dixie Chicks and Court Yard Hounds was a co-writer on the album's Celtic-tinged 'Mother Mary,' while American music legend Woody Guthrie penned the lyrics for 'Sun Jumped Up,' sent to Tim by Woody's daughter Nora for him to set to music. A highlight of the album is the delightfully off-kilter 'Not Afraid of Dyin', which the musician says was inspired by his late father, who passed away at the age of 96.

"Right before he died, I called him from New Zealand," Tim remembers fondly. "It was like I was calling from Mars ... he was born in 1913, and he saw a lot of changes. He was amazed by what was going on."

The same will be surely said for those who sample everything going on in 'Chicken & Egg.'