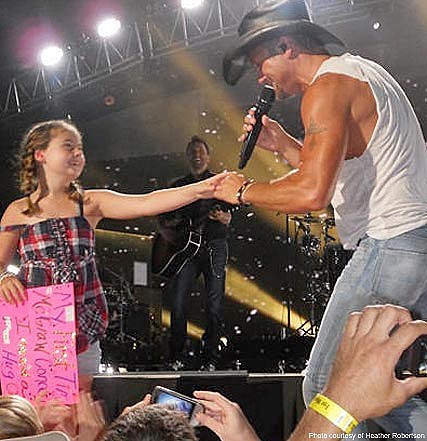 She was born with a heart defect that required dangerous, open-heart surgery at age 3. A few years later, she suffered a mini-stroke. Today, nine-year-old Megan Robertson remembers listening to Tim McGraw's, 'Live Like You Were Dying,' while she was going through rehab to learn all over again how to read and use the left side of her body.

When she heard Tim was bringing his Southern Voice tour to Bristow, Va. last weekend (July 12), Megan made a sign. It read, "This is my first Tim McGraw concert. I need a hug." A local news website, fredericksburg.com, reports that on the day of the show, as the fourth-grader and her mother were making their way towards the concert pavilion, a group of guys came jogging by them. Noticing Megan's homemade sign, one of them quipped, "I like your sign!" And then turning back to her with a wink and a smile, he shot over his shoulder, "See you later!"

In a twinkling, Megan and her mother realized it was Tim McGraw.

Inside the pavilion, Megan and her mom were shuttled to the front of the stage by security, who took note of her sweet sign. The little girl caught Tim's eye and he immediately began playing to her. At one point, Megan even had opportunity to slip a guitar-shaped Silly Band onto Tim's wrist.

It was when Tim's band began playing 'Tiny Dancer' that Megan was to be transported into a dream-like world. As he was singing down to her, Tim motioned for Megan to come up onstage with him, and all at once, she found herself being lifted by fans around her up on the stage. As Tim twirled Megan around, singing 'Tiny Dancer,' tears of joy began spilling uncontrollably from her eyes. In the wings, Faith Hill could be seen waving at her husband and his "tiny dancer."

When he was finished singing, Tim suddenly remembered Megan's sign ... and tenderly granted her fairytale wish. And then, like Prince Charming, he bowed to her.

Megan says she will keep her homemade sign ... "so he'll always remember it's me!"