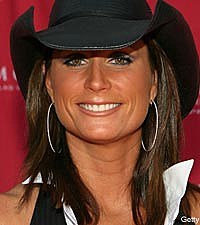 Terri Clark is a nominee at this year's Canadian Country Music Awards, which will be handed out Sunday night (Sept. 13), but regardless of whether she takes home the trophy for Female Vocalist of the Year, she's already a winner because of who'll be attending the ceremony with her. Terri's mother, Linda, plans to be at her daughter's side for the awards show; something Terri wasn't sure her mom would ever be able to do again, after Linda was diagnosed with cancer two years ago.

"It has a lot of special meaning," Terri tells the Edmonton Sun. "It's a really wonderful moment to get to share with her again, because she's been such a huge part of the inspiration behind everything I'm doing now and everything I've done up until now. We've been this little team, and it's going to be great to have her there."

In addition to being an inspiration, Terri's mother has also been her closest confidant. "If you think about the person closest to you, who has been your whole life, the one person you can't imagine not being here -- almost an extension of you, that would be my mother for me. So when somebody tells you that that person has an expiration date and that they're going to be yanked out of your life in 12 or 14 months, because that's the statistic and that's generally what happens, it does something to you."

Facing her mother's terminal illness is part of what inspired Terri to take a huge professional risk by leaving her major label, Sony, in favor of making the kind of album she wanted to make. "I just wanted to make a record that I felt really good about," she says. "If my life had an expiration date, what would be the last product that I would leave here?"

The result of that soul-searching decision, 'The Long Way Home' is now available at digital outlets and will be available in stores next month. Terri, who is already the recipient of nine CCMA trophies, will also perform during the awards show.