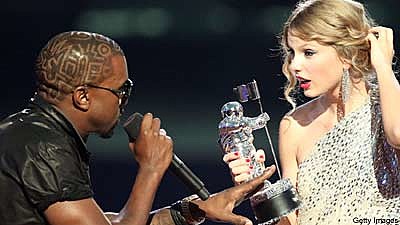 Taylor Swift may have been shocked, annoyed, angry ... any mix of emotions as she watched Kanye West steal her microphone and interrupt her MTV VMA Award acceptance speech. But she hardly showed it. The teen superstar kept her composure the whole time she was on stage at Sunday night's show. But backstage, she was reportedly crying before having to face reporters.

Kanye was kicked out of the show after he stole Taylor's thunder. "Beyonce had one of the best videos of all time. Of all time!" the rapper yelled, as a seemingly shocked Beyonce shook her head in disapproval.

Kanye was promptly booed, as he was for the entire night when his name was mentioned. Several times during the broadcast, the audience erupted into chants of "Taylor! Taylor! Taylor!"

"I've been getting so many text messages, and everybody's been really nice," said Taylor. "I've had a really, really fun night. It's definitely been an interesting night."

But the question on everyone's mind is, what does Taylor have to say about Kanye? "I don't know him, and I've never met him, so I don't want to start anything because I had a great night tonight," she answered when probed by reporters.

Instead of speaking ill of Kanye, Taylor chose instead to praise Beyonce. After winning the night's top honor, Video of the Year, Beyonce called Taylor on stage to let her finish her speech.

Taylor's win for Best Female Video was her first-ever VMA victory, as well as the first time ever that a country star has taken home a VMA. She also dazzled the audience with a performance of 'You Belong With Me' on the New York City subway! Watch it below.