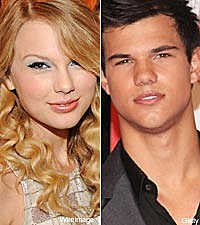 Taylor Swift continues to let the rumors swirl of her supposed romance with 'Twilight Saga: New Moon' star Taylor Lautner, who recently accompanied the singer to a hockey game one night and had dinner with her mother the next. But while she still doesn't admit to a relationship, she does gush a little about the teen heartthrob.

"I don't know, he's an amazing guy and we're really close ... and ah ... yep," she tells CMT (quote via PEOPLE). "We're in a movie together and I am really excited about seeing it."

The movie, 'Valentine's Day,' which has an all-star cast including Bradley Cooper, Julia Roberts, Jennifer Garner and several others, comes out on Feb. 12.

Not that Taylor plans to wait that long. She says the pair will "get to do a private screening because we both wanna see it so bad, cause our scene was so much fun to do, it was hilarious doing this scene!"

Not only is Taylor getting ready for the silver screen, she is also preparing for her debut role as 'Saturday Night Live' host on November 7.

"I'm so excited, not sure if I'm ready," she says. "I try to prepare for everything beyond the extent of preparation. So I have all these ideas for skits, I have like 10 ideas right now, I'm probably gonna walk in there with 35 ideas."

Taylor, who recently announced an extension of her 'Fearless' tour for 2010, will perform at the upcoming CMA Awards, Nov. 11 on ABC. She's nominated for four awards, including the coveted Entertainer of the Year.