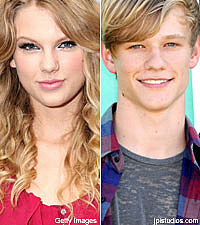 Taylor Swift may or may not be dating 'New Moon' star Taylor Lautner, her co-star in the upcoming film 'Valentine's Day.' Neither one's really talking about the status of their relationship at this point. But another of the young superstar's former co-stars is spilling the beans -- sort of.

Actor Lucas Till, who played Taylor's love interest in the 'You Belong with Me' music video, says the pair began a brief relationship soon after he appeared in that clip. In an interview with MTV last week, the 19-year-old says, "We dated for a little bit. But, there was no friction because we were too nice. Most relationships work out 'cause you get along and then you don't, and then you make up and it's passionate, and with us I really just liked her as a friend. That's the only reason that didn't work out."

Thanks for that fuzzy clarification, Lucas. Perhaps we'll find out just what really happened when Taylor writes a song about it!

Even if their relationship didn't quite work out, Lucas had an interesting note with regard to Taylor and another of his on- (and rumored off-) screen hook-ups. Back in the summer, he was asked about a kiss he shared with his 'Hannah Montana: The Movie' co-star Miley Cyrus, and how that compared to kissing Taylor.

"I chose Taylor Swift [in August] and I'm gonna stick with that answer."