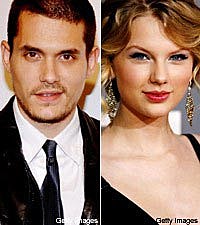 It wasn't just Twitter-talk after all. Taylor Swift and John Mayer have recorded a duet together.

Country Music Is Love reports that John's upcoming album will include a collaboration with the teen country sensation on a track called 'Half of My Heart.' John "tweeted" about wanting to record the song with Taylor back in March: "Waking up to this song idea that won't leave my head. 3 days straight now. That means it's good enough to finish," he wrote on his Twitter page. "It's called 'Half of My Heart' and I want to sing it with Taylor Swift. She would make a killer [Stevie] 'Nicks' in contrast to my 'Tom [Petty]" of a song."

Taylor has also tweeted many times about admiring the pop-rocker's music. She even won a challenge of sorts that John gave to his Twitter followers:

"Ernest Hemingway once claimed he could write a great story in six words. What's your six word story?" John tweeted. Tayor rose to the occasion by responding: "My diary is read by everyone," to which John replied, "Taylor Swift, stepping up to the plate! Love it."