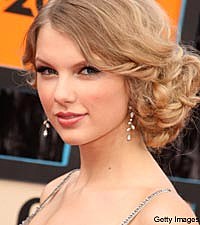 She's the biggest-selling artist of any genre in 2009, and now Taylor Swift has an even bigger record to report. One hundred times bigger, in fact. According to Billboard, the country superstar has the longest charting album of this entire century.

Taylor's self-titled debut CD, released in October of 2006, has been on Billboard's Top 200 albums chart for 157 weeks -- more weeks than any other album, beating the record previously held by Nickelback. Taylor also stakes claim to the Billboard record for most Top 10 debuts in a year, and she's the only solo female artist in Billboard history to have five Top 10 singles from a debut album. Additionally, she's the record-holder for the longest-charting female country star in the Nielsen SoundScan era and the only country artist in history to have a No. 1 song on Billboard's Nielsen BDS Hot 100 airplay chart.

On the heels of this incredible news comes Taylor's first time hosting 'Saturday Night Live,' this Saturday, Nov. 7. She'll also perform on the Nov. 11 CMA Awards, where she's up for the night's top prize - Entertainer of the Year, along with three other nominations.