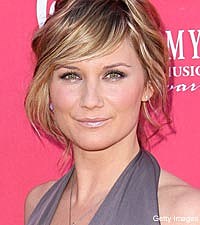 Sugarland's Jennifer Nettles is out and proud of her fans, no matter what their sexual orientation. When asked if she knows about her gay and lesbian fan base, the singer told ChicagoPride.com, "I've been aware even before Sugarland. I've actually performed at Gay Pride in Atlanta three times in my career. I've always had a large gay following, particularly in the lesbian community. I am grateful for that. To me, it means my music transcends categories. It also means that I'm a cute girl singing a rock song in an alto voice!"

Jennifer insists that she and singing partner Kristian Bush just set out to make music that "celebrates the human condition" -- no matter what age, race, sexual preference ... or hometown!

"I had a friend write me that our music was being played at Gay Pride in New York, which is a big compliment," she said. "In the biggest city in the country with the most culture and the most grit -- I love it."

Sugarland is celebrating their recent debut at No. 1 on the charts with their live CD/DVD set, 'Live on the Inside.'